southeast london has been my home for the past two years and with each passing week, i grow to love it more. those in london will quickly tell you they don’t even know what’s down here, largely because most of southeast london is not represented on the venerable map of the london underground – essentially the deciding factor for most in understanding the city’s geography. southeast london has plenty of transport – we have the docklands light railway, we have lots of national rail trains (which don’t really count as viable transport in the minds of many londoners, as they do not feature on the tube map) and we have a shiny new overground, which luckily does feature on the underground map (in orange). 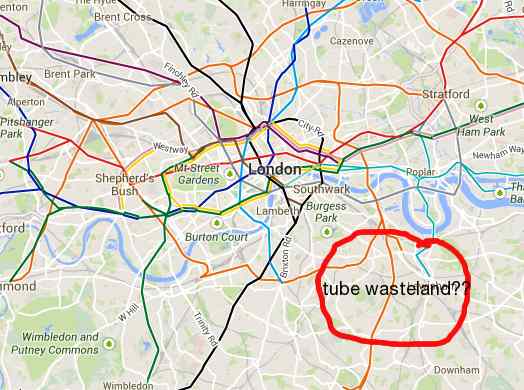 but i digress. i love southeast london and can’t imagine living in any other part of the city. perhaps directly because of its reputation as being ‘far away’ (nevermind that i have a shorter commute than some of my colleagues who only go by tube), the area is full of people who really love their neighbourhoods, who like to keep the place just that little bit secret, and who are just plain good, hard-working folk.

for me, one of the best things about southeast london is the selection of pubs. the incredible antic pub cooperative has opened many of their first (and best) pubs in this part of london, and there are numerous independently owned drinking holes not overrun by city central revellers, which is amazing and, frankly, worth travelling down for. here is a (by no means exhaustive) selection of the best pubs in southeast london:

ah, ravensbourne. how i love thee. my writer’s drinking hole of choice, the ravensbourne looks like it was once an oversized man haunt with sticky floors and stained carpets. now it is a shabby chic, down-to-earth delight with a selection of charmingly ripped couches, dark wood tables and tasselled lamps where fresh pints of lovely stuff are always poured by smiling bartenders. the four (or is it five?) hand pumps are constantly rotating, to the point that i don’t think i’ve ever had the same beer twice there. they also stock a few interesting craft beers on their taps, as well as some standard stock to satisfy the unadventurous. food’s great, back garden is grotty in a nice way, the clientele draws heavily on lewisham hospital across the street, and they have a pub cat, nala.

shh. please, don’t tell anyone in east london about the stormbird. located in ever increasingly hip camberwell, the stormbird is a true craft drinkers bar. i already included it on my list of the best craft beer bars in london, so you know you’re going to drink well here. tons of taps and casks, always rotating, friendly, big windows. no food, just beer.

on that dodgy strip of road that connects deptford to new cross, the royal albert shouldn’t be as awesome as it is. but it is an antic pub, and therefore insanely great. the bartenders here really know their stuff and are passionate about beer, and if they see you ordering something remotely interesting (for example, from their rotating casks), they will offer advice, chat and generally be wonderful. there’s also a few gems in the fridge, so don’t be afraid to peek back there. decor is typical shabby chic, and there are a few picnic tables in a strange front garden with a (not) charming view of (not) scenic new cross road – nice bit of air, though. thankfully mostly devoid of chattering goldsmiths undergraduates.

refitted in 2012, the station was as close to our local until we moved a month ago. i am including it for its fabulous beer selection, friendly staff and amazing garden. i am not including it for its slightly awkwardly rendered food menu (which is overpriced by a few quid) and the gaggle of families that overtake the garden on weekends. but this place has 12 ale pumps as well as standard uninteresting taps of the big names, and the pumps rotate very often and do stock local beers (such as the fantabulous brockley brewing company, whose ales i can’t get enough of right now). if you can nab a seat in the garden on a warm weekday evening, this place is just about perfect.

forgive me for banging on, but have i mentioned antic? well, they are responsible for sylvan post, too. weird name for a pub, until you find out that it’s located in a converted old post office, complete with linoleum 60s decor. it’s not the most comfortable pub in the world, owing largely to the mish mash of industrial 60s furniture and promptly rectangular layout, but it has some quirks that really stand out – the two safes have been gutted and now house seating and much of the decor is postally themed. can’t comment on the food, as i haven’t eaten there, but the taps offer rotating, interesting real ales and ciders.