when we first moved to england two years ago, i ran into a beer from a brewery called marble brewery, based out of manchester. their beers are fairly uncommonly found in london, but whenever i saw one on tap, i would smile to myself, recalling with fondness my favourite brewery from back home in new mexico, which is also named marble brewery.

some time went by, and eventually i was sat over a pint of marble manchester’s best bitter with a friend from back home (also living in london, woop!) and recalling with fondness many a night spent on the amazing patio at marble albuquerque, quaffing their unstoppable red ale. for some reason, i decided to have a look at marble abq’s website and stumbled upon a little blurb that said marble abq was named after marble manchester.

fast forward to may of this year and what pops into my facebook feed but an update from marble abq saying they are going to be making an appearance at their namesake brewery’s 125th birthday festival in august. what the what!

so, of course i rounded up Off Duty Bill (who is also a huge fan of marble abq’s red ale, along with the many and sundry delicious suds on offer from marble manchester) and made plans for a weekend jaunt up. seriously guys, this is how good i think marble abq’s red ale is. also, manchester is a fucking sweet town that i love and what better excuse to go up? 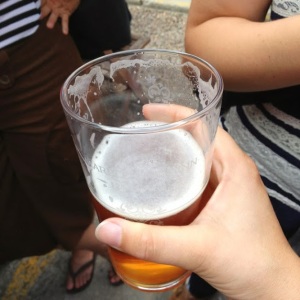 a short round-up from the fest: held in marble manchester’s marble arch pub, which is a listed building with 11 hand pumps inside. it is a funky space but very cosy and incredibly atmospheric. in addition to – of COURSE – the marble abq red (which the guys from the 505 were kind enough to put on at my request), i also sampled several new-to-me marble manchester beers and fun was had by all when a celtic trad band came on to play a few tunes. 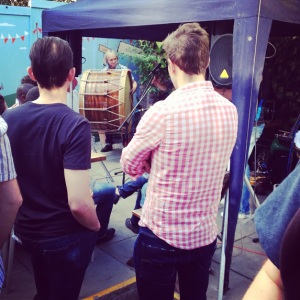 in additon to the marble arch, we spent some time pub crawling around manchester and found some very recommendable pubs for crafty, casky and real aley beers as follows:

soup kitchen – not actually a pub, but a lovely little homestyle restaurant serving up soups (obvi) and giant sambos, and has a nice little collection of six hand pumps stocked with regional casks.

port street beer house – absolutely outstanding craft beer bar with a modern vibe and heaploads of taps, both cask and draft. also, deadly barman who kicked out a stag party dressed as cowboys. huge win in my book.

black jack brewery – sadly, not regularly a brewpub, this outstanding brewery is about 2 minutes down the road from the marble arch and opened their brewery and front space up with a marquee, picnic tables, a DJ and some of their seriously fresh beer straight from the source. arguably a better atmosphere than was in the marble arch (which was a bit cramped, because so popular!).

lass o’gowrie – more of a straight ahead boozer with heaps of character than a craft beer bar, they still have several hand pumps with local and regional beers, and if you can bag a seat in the snug, it’s a treat.

2 thoughts on “marble at marble in manchester”